I’m back from a fun weekend in Nashville to run in the Rock n’ Roll half marathon. I started to write a post combining a trip recap with my race recap but it ended up being wayyyyy too long. So I’ll stick to a race recap today and post about the Nashville trip later this week.

We left NC early Friday morning and met my mom in Asheville to drop Lily off. So thankful for a grandma dog sitter! We got into Nashville later in the afternoon and checked into our hotel (the Courtyard Marriott), which was about a mile from the half start line. After settling in, we went to the expo to pick up our race packets. 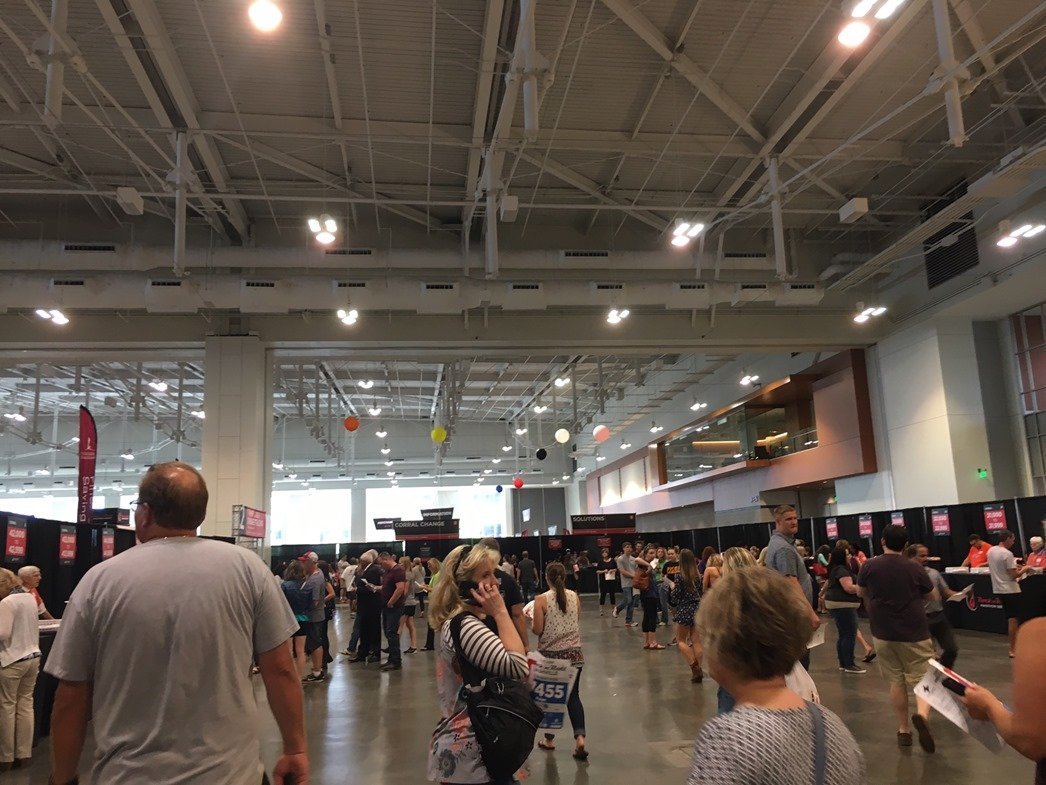 We then spent the rest of day exploring the city, ate dinner and called it an early evening in preparations for an early morning the next day. 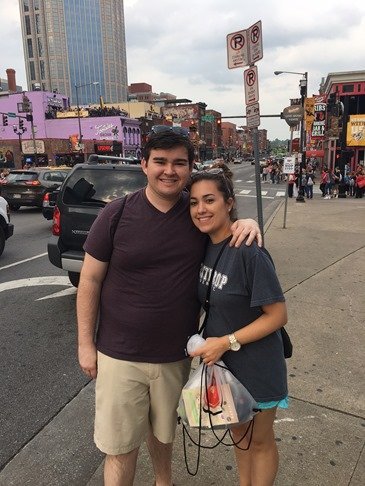 Thank you all SO much for your words of encouragement after posting on Friday about my knee hurting. I felt a knot in my stomach all Friday hoping that I could some how pull off the half, but I made a game time decision (literally 10 minutes before leaving the hotel) that I would drop down to the 5k. I just decided to be real with myself because I had not been able to run longer than 3 miles for the previous 2 weeks, and nothing had changed that would make me think I could somehow make it to the full half marathon distance. I actually woke up at 3am and got really upset about it because I felt so disappointed in myself. 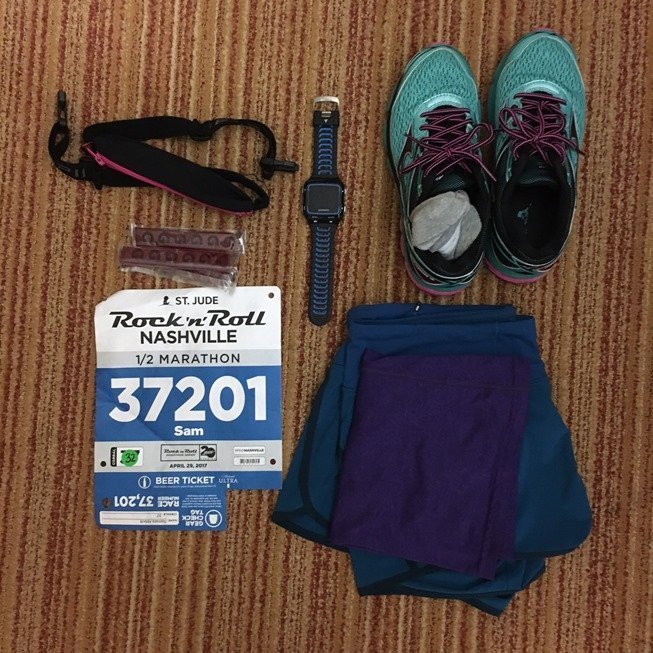 B and I both got up around 5am to catch a 5:30 uber down to the 5k start line.  B originally registered for the half marathon but had been planning on dropping down to the 5k for a while. His work schedule has been crazy lately and he is lucky to squeeze in a short gym session or minimal run most days. I think he did 3 longer runs over the past 4 months. While it was a huge bummer to not run in the half, it was fun to do a race together. 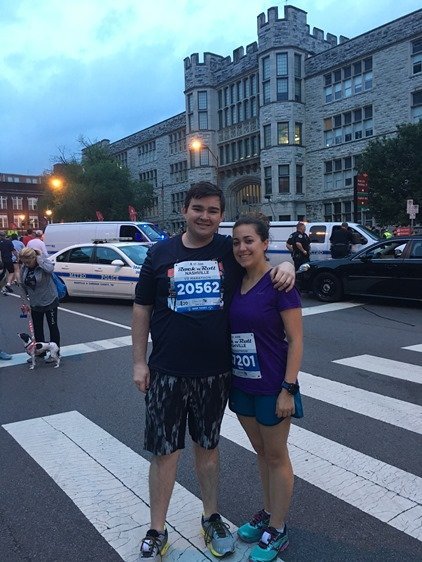 Side note: I ate a piece of toast with peanut butter right when I woke up, which is what I always eat in the morning before a workout.

They moved all of the races up to earlier times because of the heat and humidity in Nashville this past weekend. The 5k started right at 6:15. We ran through part of downtown Nashville before making our way to the stadium to the finish line. It was already in the 70s and SO humid, and I was almost immediately drenched in sweat.

I felt really good starting out in the run and decided to try for a faster pace since I was only doing 3 miles. The first mile was awesome and I felt good holding ~10 min/mile pace for the first bit, much faster than my 13:30 half pace

. They way mismarked mile 1 per my Garmin (it said we were at mile 1 but my Garmin said we were only at 0.68 miles… Garmin ended up being right I believe), so I wasn’t quite sure how I was actually doing at the time. I slowed down just a touch for mile 2, partly because my knee started hurting and partly because I could feel a lot of different areas under my sports bra start to chafe. I don’t normally use body glide but I put some on that morning as a preventative measure…. it obviously not enough! I could tell around that time that B was slowing down a bit for me, so I told him to go on without me and we separated.

I drank water at each mile along the course and did drink 1 serving of the Gatorade after mile 2. I don’t normally refuel during a shorter run, but I was sweating so much that I was just grabbing anything that was being handed out. They also had volunteers out with water sprayers which felt really good!

I mostly kept < 12 min/mile pace for the whole race but did walk for intermittently throughout mile 3 because of my knee. Once I saw 2.75 miles on my Garmin, I picked the pace back up and finished strong. My chip time was 34:53, my fastest 5k time to date. 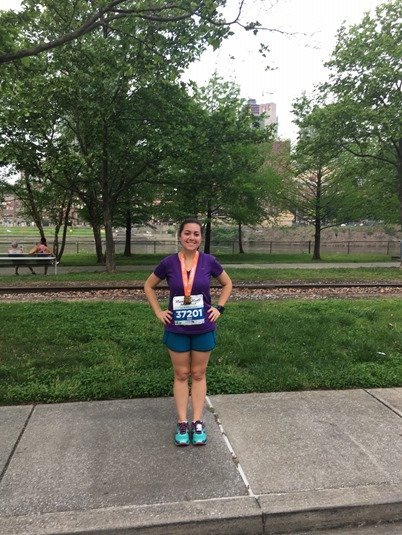 Enjoyed a chocolate milk at the end! 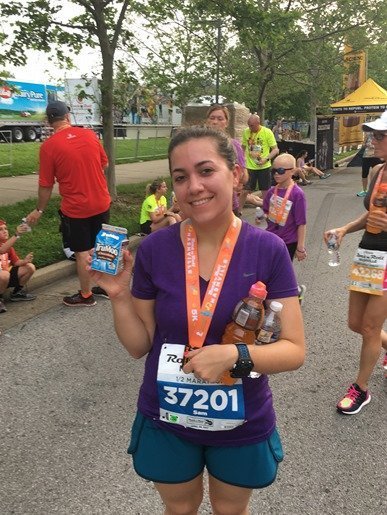 Here were my lap times from my Garmin:

I was obviously really disappointed that I wasn’t able to run in my first half marathon after all of the time I spent training, especially since I was hoping this would be my first and last half ever. But I know there will be other races, and it wasn’t worth risking injuring myself. I’m 100% glad I stuck with the 5k. I also think this was a great learning experience for me since I haven’t raced much.

I’m not really sure what lies for my future with running. I love cycling and all other forms of activities, but my training runs felt really burdensome and I honestly didn’t enjoy them. I am a HUGE advocate of doing what you enjoy when it comes to health and wellness so it seems hypocritical for me to continue to pursue the half. On the flip side of that, I already have a really strong running base built up and I think I’ll always feel like this is hanging over my head a bit. So we’ll see.

I know from my knee issue in the past that my knee is hurting because I didn’t t do enough strength training during this training cycle. I think I’ve had a lot on my plate with work and starting my own business and my cross training definitely suffered. For right now I’m going to focus on my business, letting my knee rest and building strength back up in my legs.

Thanks for hanging out with me here as I trained for this half!

Previous Post: « Friday Half Marathon Chats: Hoping for Anything but a DNF
Next Post: Friday Chats: Lately »