Hey guys! I am so behind on updating you about our home renovation! I last updated back in December at week 16. Things were pretty boring for a while but we’re finally back in action now.

Several of you have messaged me on instagram because you’re thinking about doing a home renovation as well, so I’ve tried to structure this post so that it’s easy to follow. I know it’s lengthy but I’m hoping to get back to speed soon with more regular updates moving forward.

So let’s play catch up!

Weeks 17-25: Getting plans back from our structural engineer

Once we finalized all of the plans with the architect, it took him about 5 weeks to create construction drawings that will be used for the actual construction of the house. We got them back right before Christmas, made a few tweaks to them, and then they were sent to the structural engineers for markings right after Christmas. We also sent them to our contractor to go ahead and start gathering pricing. 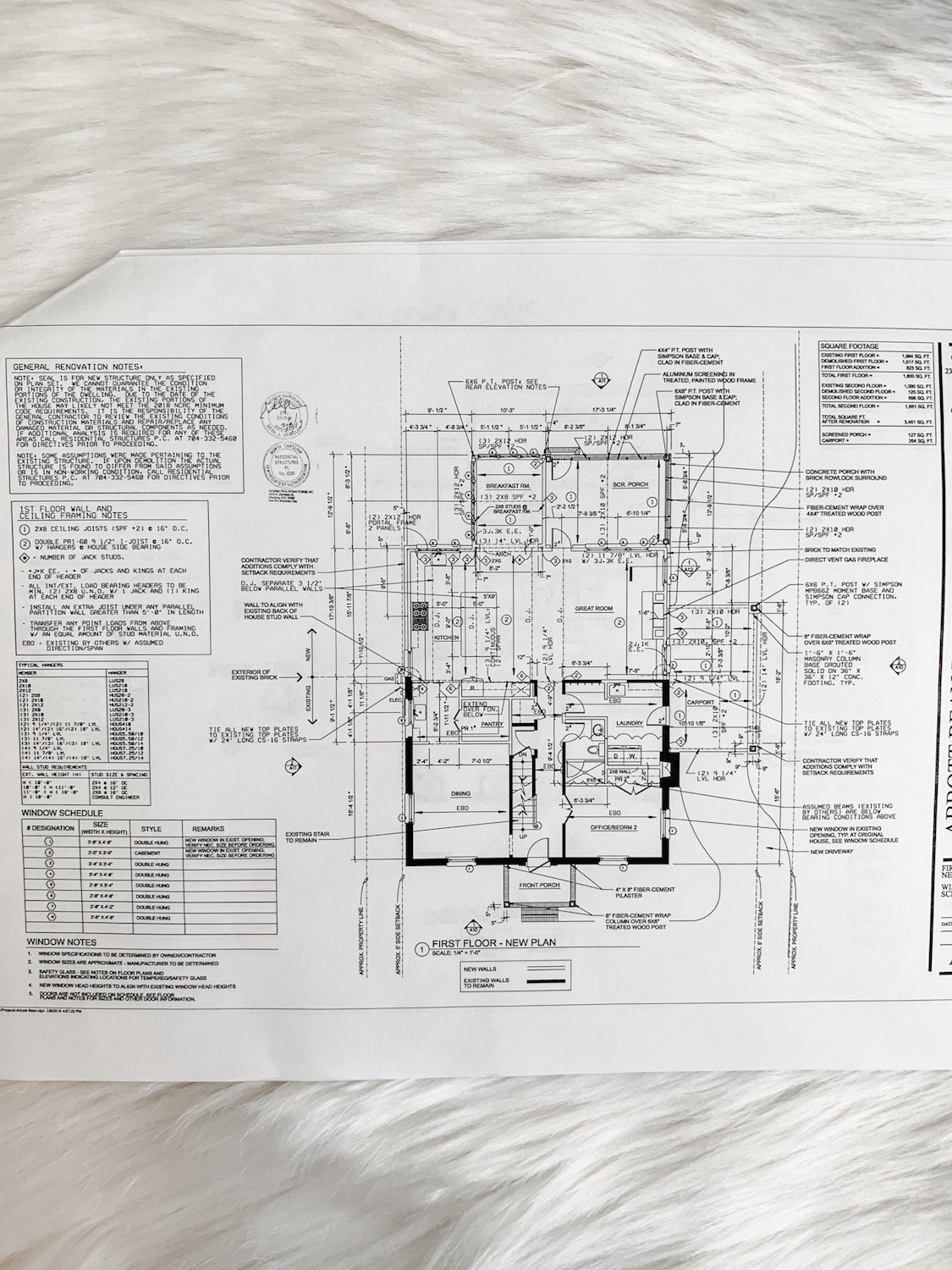 The structural engineers took about 3 weeks to get back to us with markings (Jan 16) and then our contractor met with them afterwards to discuss some of the things in the drawings that were driving up costs. They made a few edits based off of that meeting and we received the final seals the following week.

We then met with our contractor to go over pricing for our renovation. After spending 6 months talking about estimates and hypothetical numbers for everything we wanted to do, this was the first time we saw concrete numbers. Talk about anxiety! We went over a spreadsheet that was 4 pages long listing each cost for the renovation. We laughed. We cried. I mourned the official loss of my handbag budget.

While the numbers were pretty much what we were expecting, there were a lot of moving pieces that left things up in the air. A few examples: we had to decide whether we were pulling up the existing hardwood floors upstairs or leaving them,  if we wanted to replace the plaster walls with drywall, and whether we wanted to replace the old dilapidated wooden retaining wall in the front driveway.

We decided to sit on the information for a few days and think about our options. Some things luckily didn’t have to be decided yet so they were left in the budget as an option. A couple of things also came up in our pricing meeting about the design – placement of windows, a wall that needed to be drawn differently etc. So the plans went *back* to the architect again.

We got our final FINAL drawings back from the architect and they had to go backkkk to the structural engineer for final seals again. We couldn’t get our building permit without the drawings with final seals, so we had to wait on all of that before we could start exterior demo.

They piled all of the debris in the old addition of the house so that it could be hauled away when they tore it down. This saved us on a dumpster fee. Holla. 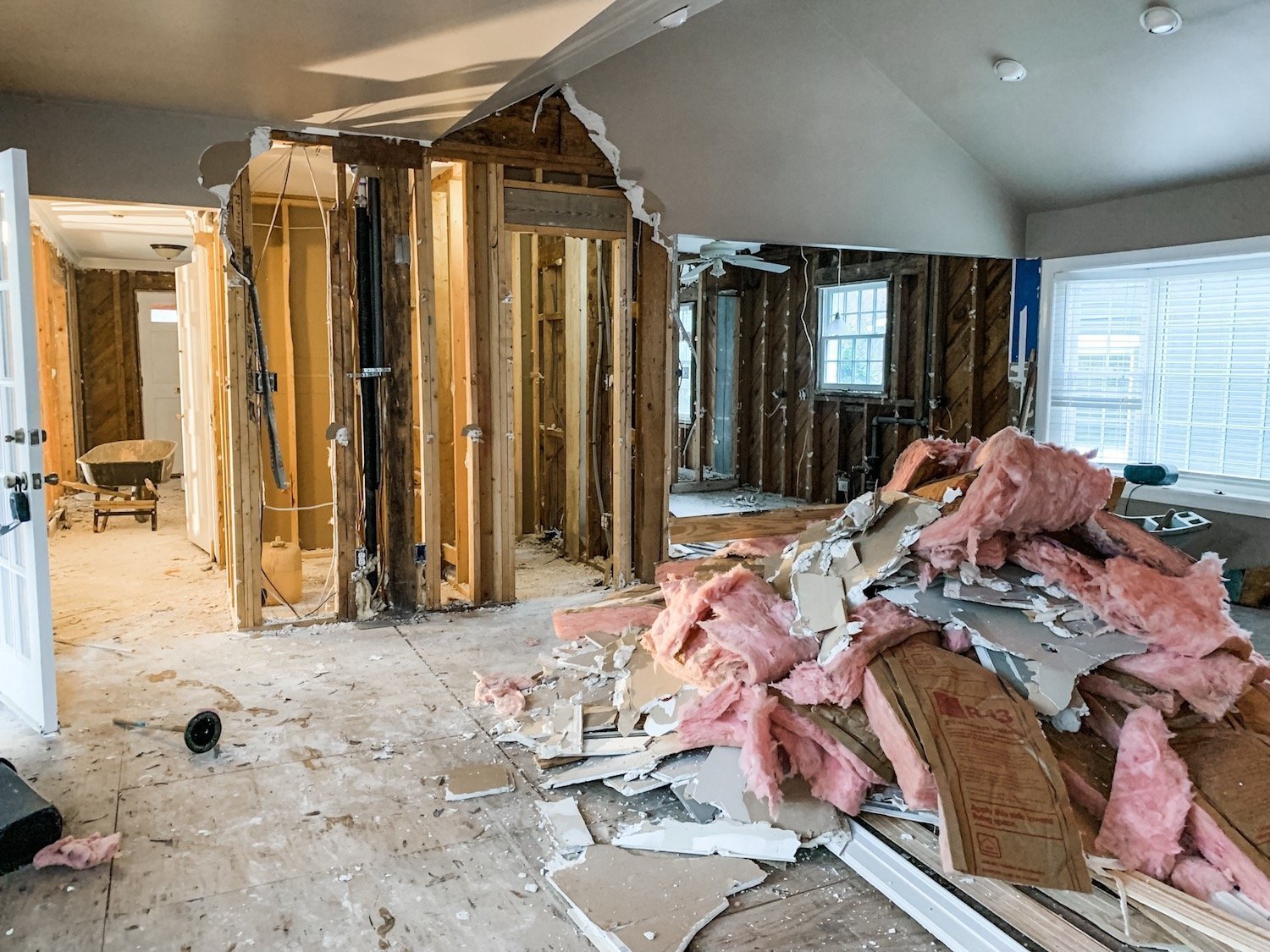 B and I made our first selections of windows, exterior hardware, roof shingle color and metal roof color. I’ll share where we’re going with that in another post!

We started out week 30 really excited because this was the week of exterior demo. It felt like the *official* start date of the renovation. 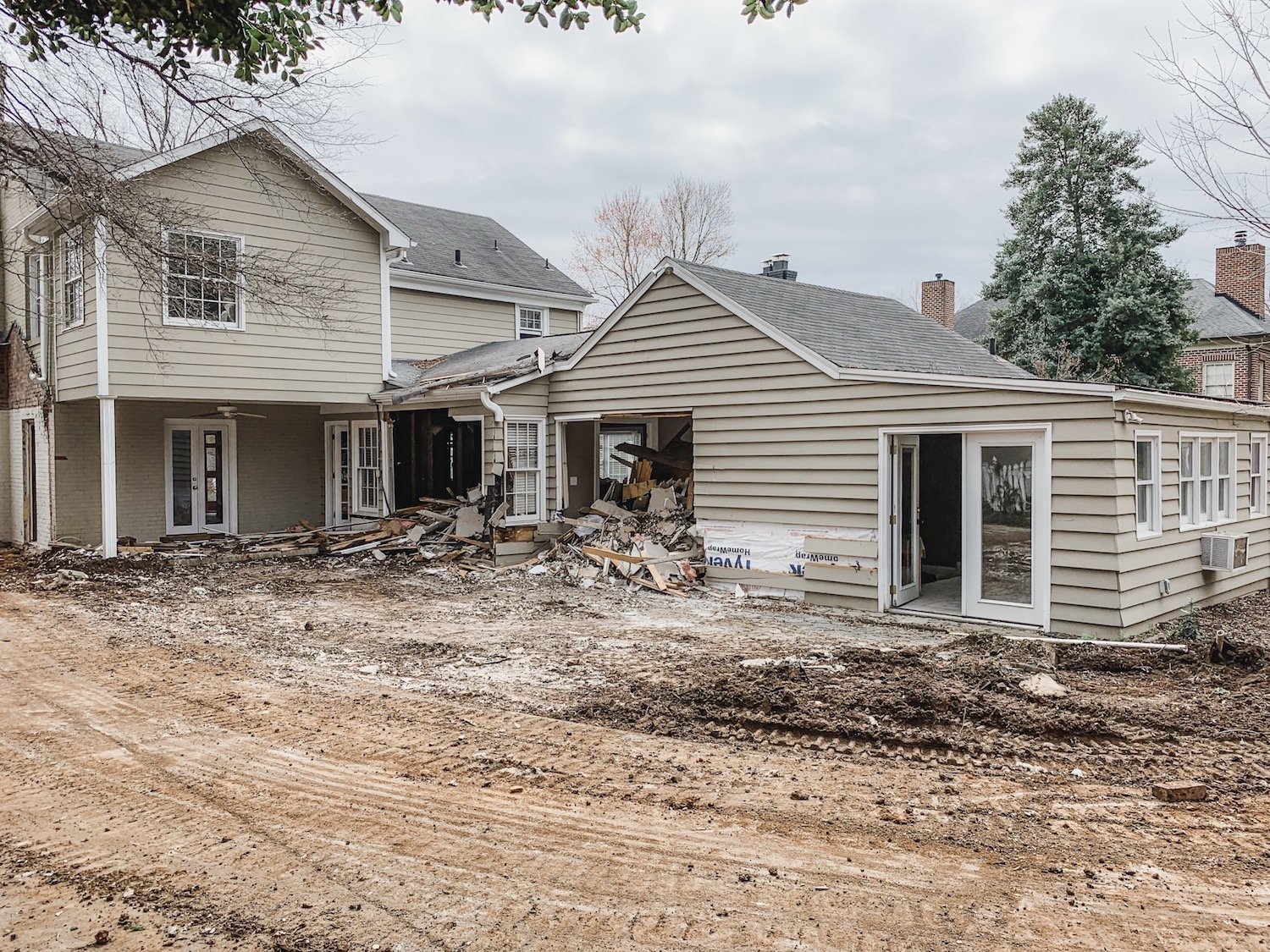 All parts of the poor addition were removed…. the side office, the upstairs office and bathroom, the downstairs living area, and then 2 extra rooms on the back of the house. The upstairs office and the side office were the 2 worst rooms for cat pee so we were not sad to see them go. Do you know the feeling when you have a bad house guest and you just can’t wait for them to leave? That’s how we felt about this poor addition.

It was so weird and awesome at the same time to drive up to the house and see 1/2 of it completely gone!

We are replacing the poor addition with an open family room & kitchen, and a master suite right above it. We got our survey on Monday and then they started digging space for the crawl space and footings for this. 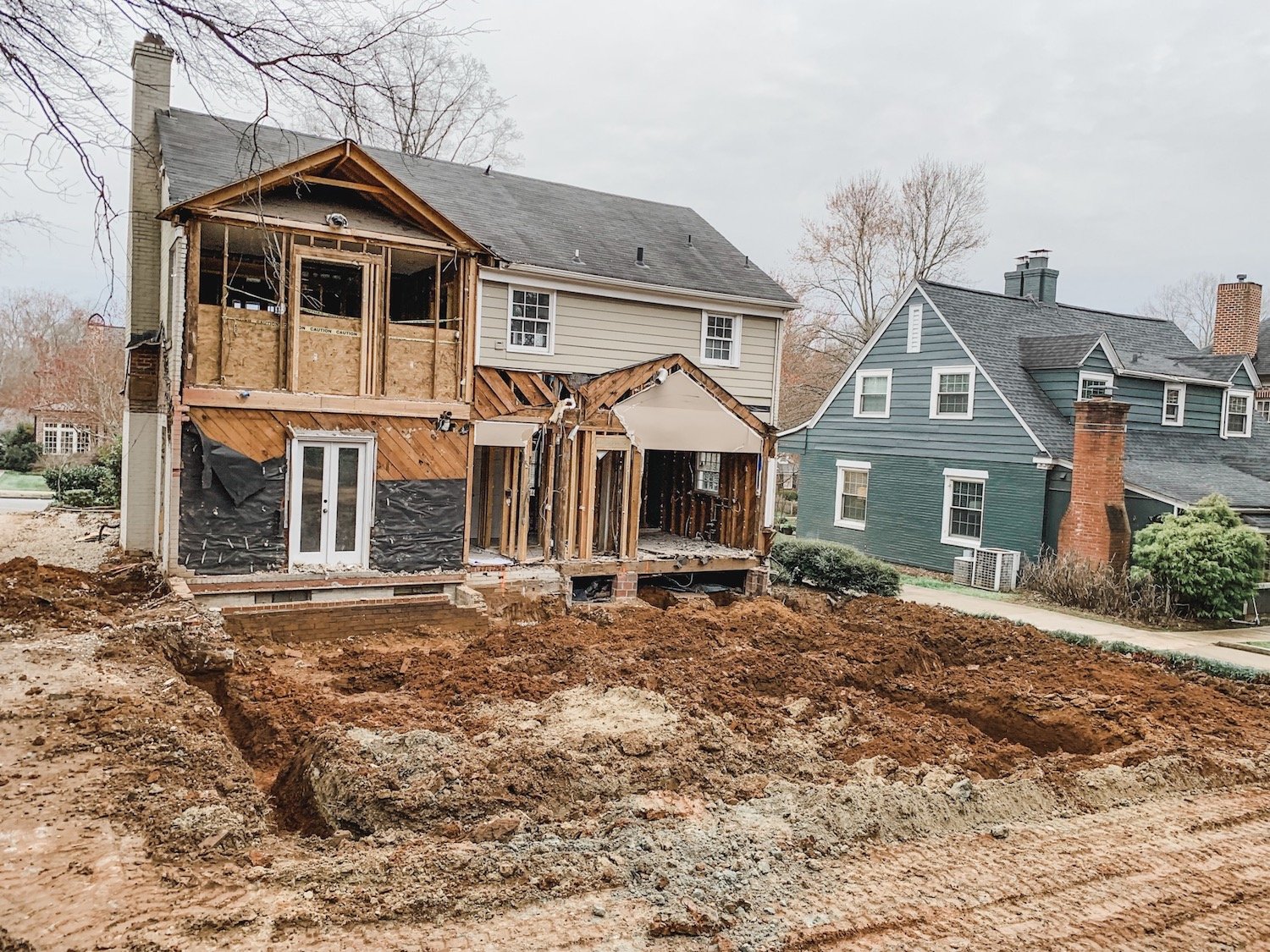 When they removed the old back porch during demo, they discovered an old stairwell that led down to the basement. The basement walls had been sealed for water proofing on the inside so we had no idea the stairwell or door were there. 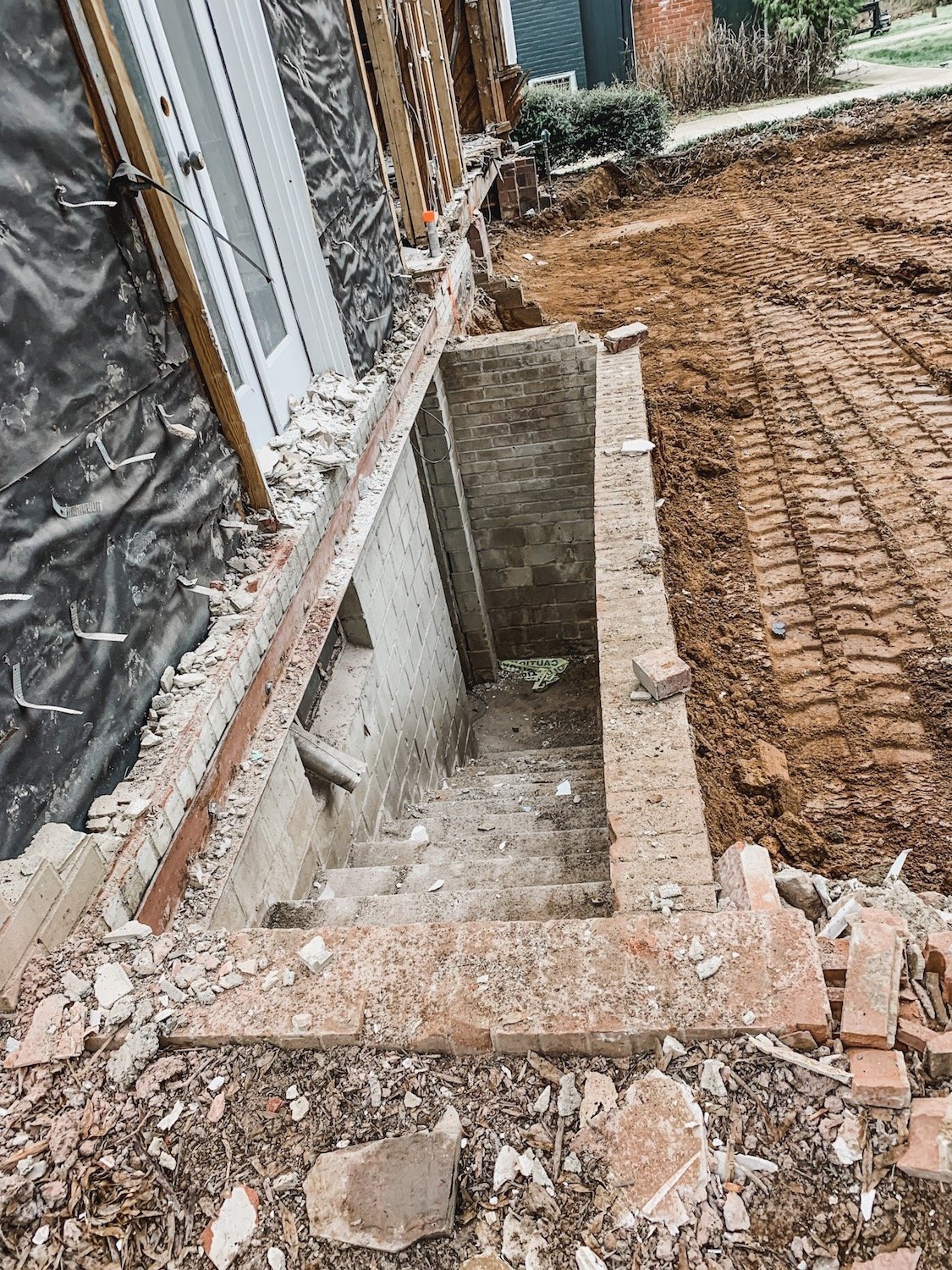 Our contractor had to get back in touch with the structural engineers to determine what type of additional support the house would need over the stair well. B and I started to brace ourselves… two weeks in and we were already encountering unexpected issues :) We ended up needing some extra support, but the overall expense wasn’t too bad.

B and I also started moving on to our second round of selections: appliances, countertops and plumbing fixtures. We are actually still finalizing those now so I don’t have anything to share yet!

They completed the foundation of the house during week 32. Prior to then, we had only seen our floor plan on paper… it was so crazy to see it in real life! 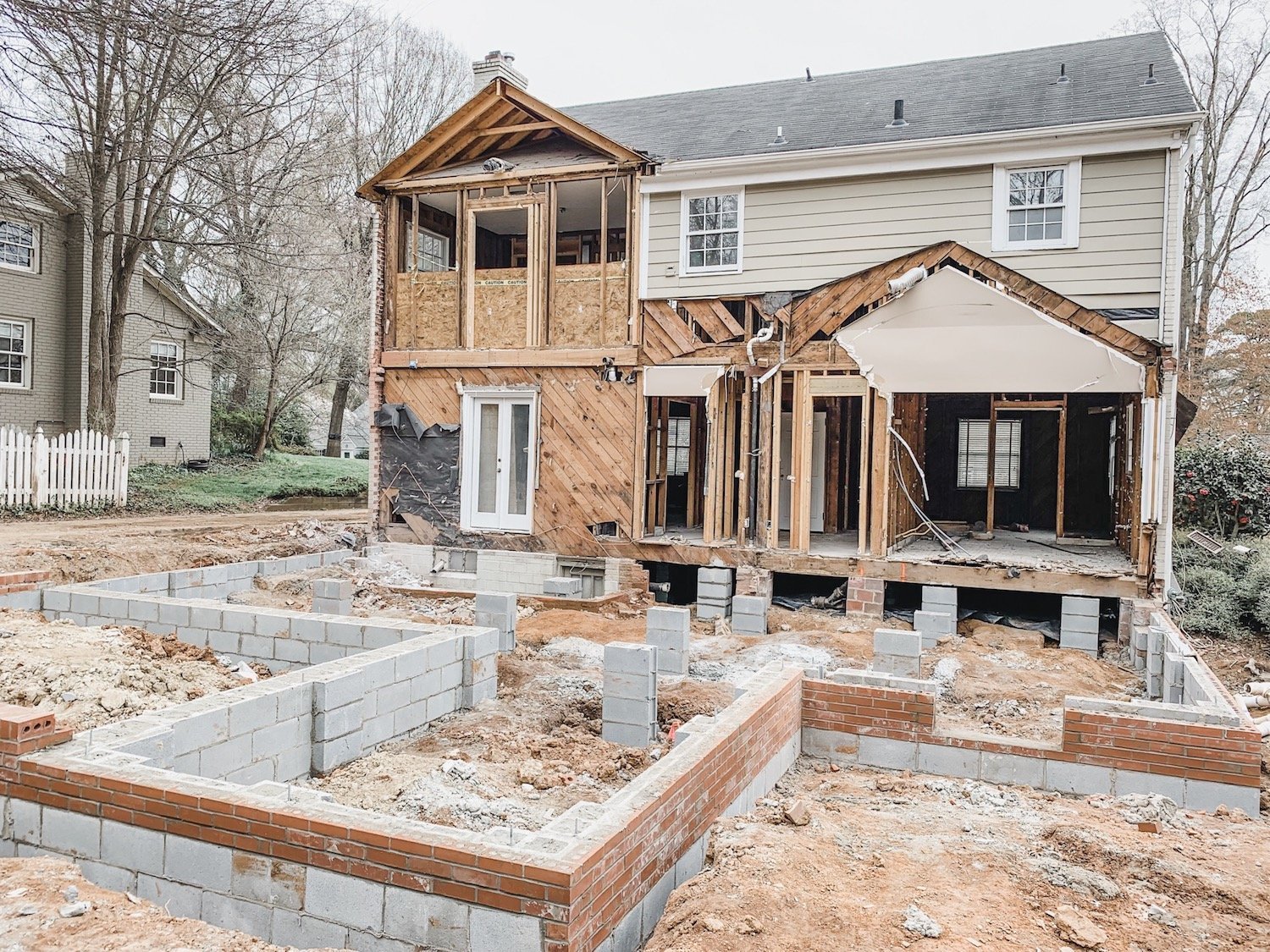 They started framing the house on Wednesday. This has been the most exciting week for us because the actual construction piece is in full force. This house has seemed like a giant shit show at times, so I love how our contractor told us “The only way to move now is forward”. Framing usually takes 2-3 weeks but can take up to 4 weeks depending on the weather. Thankfully we had a mostly sunny week last week with no major issues, and they had started framing the upstairs by the weekend. 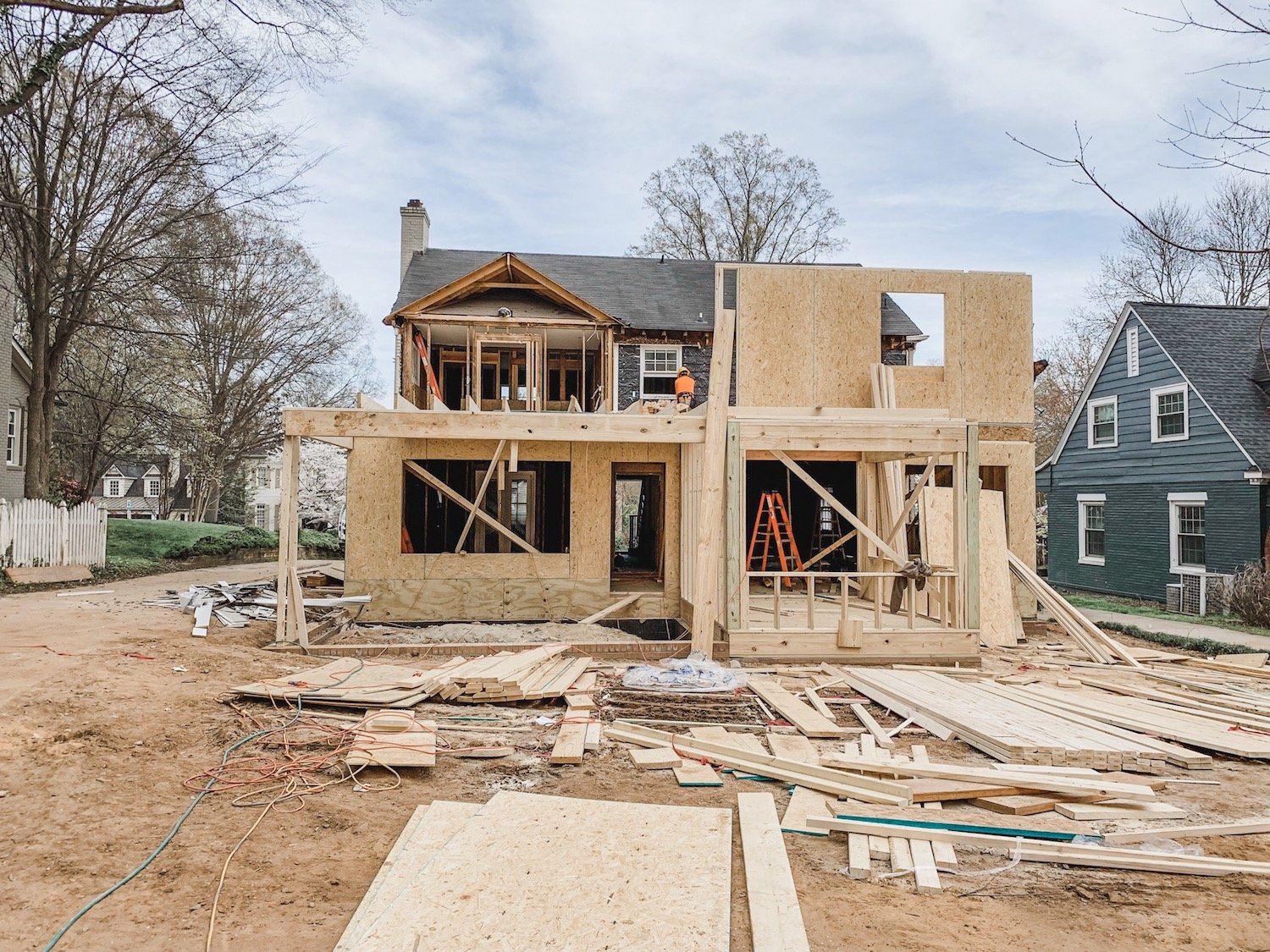 What you’re seeing in this addition is an open room with the family room on the left and the kitchen on the right.  There’s an eat-in kitchen area with an adjacent screened in porch on the back. We had so many discussions about whether to include a space for table and chairs in the kitchen since we already have an island, but I’m glad we decided to go with it. The area brings in so much natural light to the back of the house and I think we’re going to love eating there. 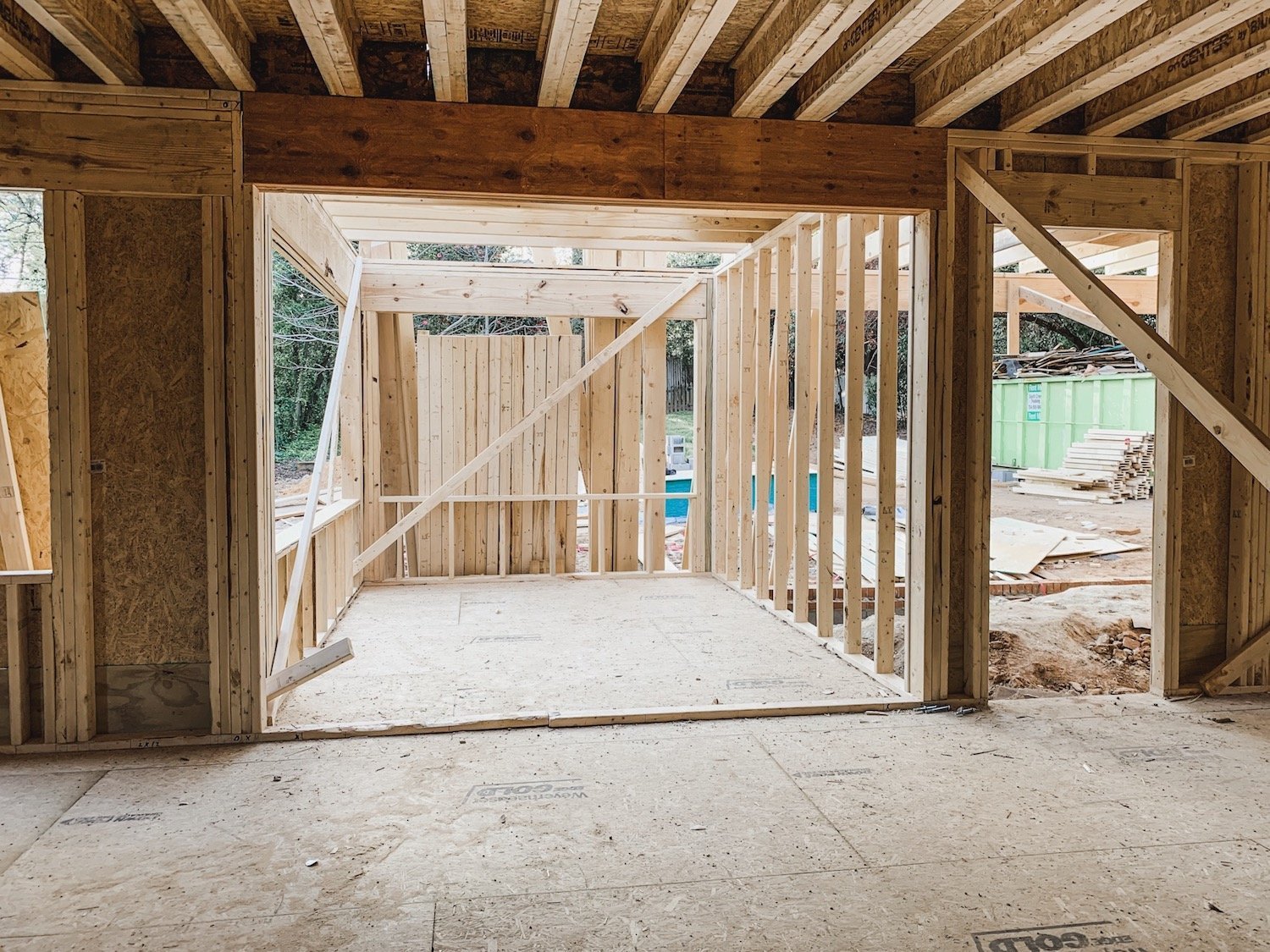 I’m going to end this post on a high note. You may remember back in December that we pulled up all of the hardwood floors in the downstairs to get a good look at the sub flooring, and that we were truly able to see the cat urine damage. We cannot replace the entire sub flooring because it runs under the walls and it would compromise the structure of the house. So we knew we were going to have to replace sections instead and roll the dice by sealing the rest. After we saw that the cat pee had really gotten into the bones of the house, I’ve had a lot of anxiety that we would complete this renovation and there would still be a lingering smell when we were done. 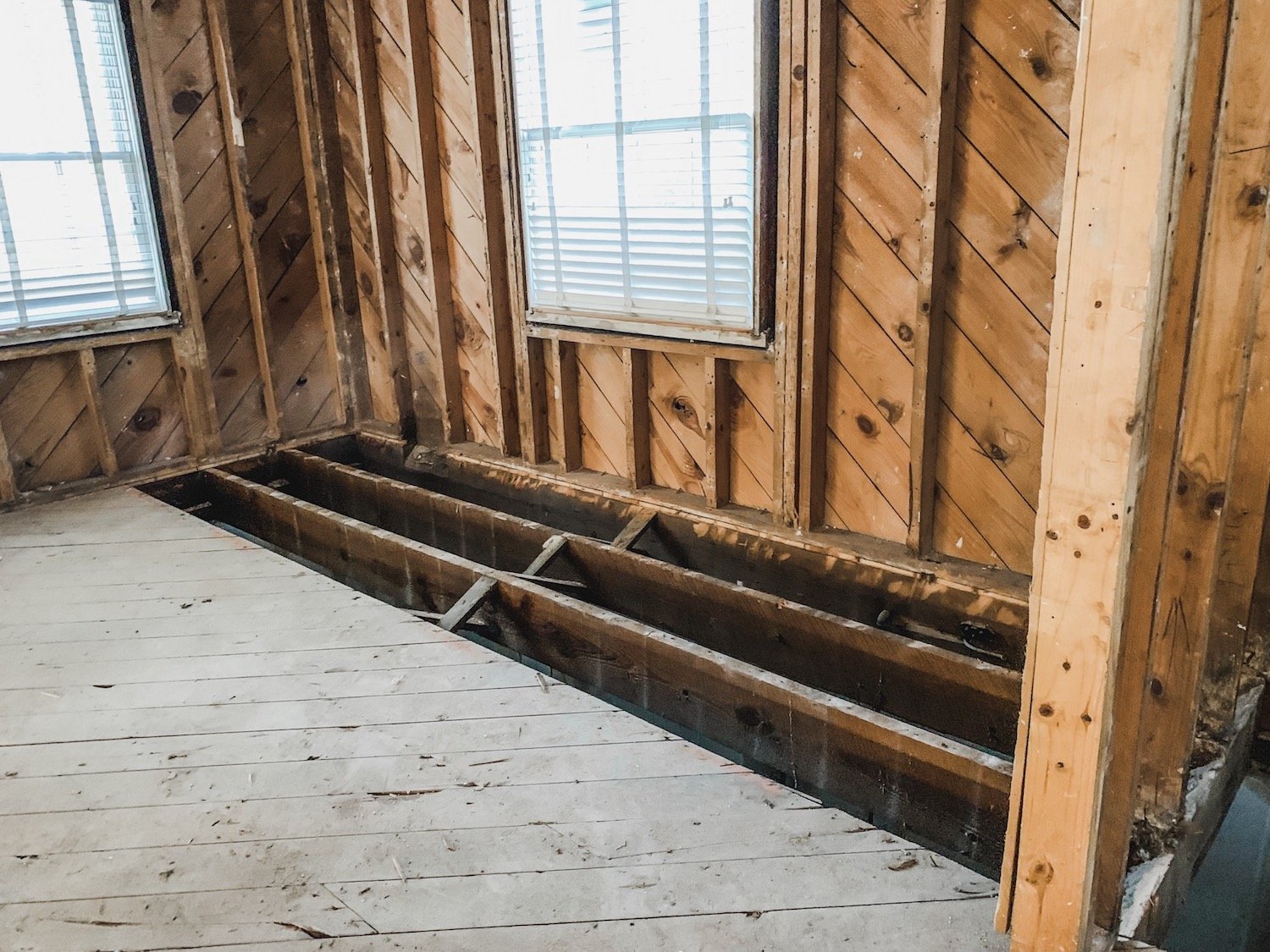 Last week, we walked through the house with our contractor and marked the spots of sub flooring that we wanted to replace. The sections of the sub flooring were removed at the end of the week. When Rich and I walked through the house on Saturday, it was literally the first time since this summer that I have not smelled cat pee. We are still going to get the rest of the subfloors sealed just in case, but I feel like we can officially close the chapter on the cat saga. No more cat house. Just a house that a couple of newlyweds bought, hoping to make it their forever home <3

Please leave a comment and let me know if you guys like reading these posts, how detailed you want them to be, and what you would like included in them. I was thinking of doing a weekly recap every Friday but I would love to know your thoughts!