The home renovation is moving along thanks to really nice weather in Charlotte (minus snow on Monday – odd). 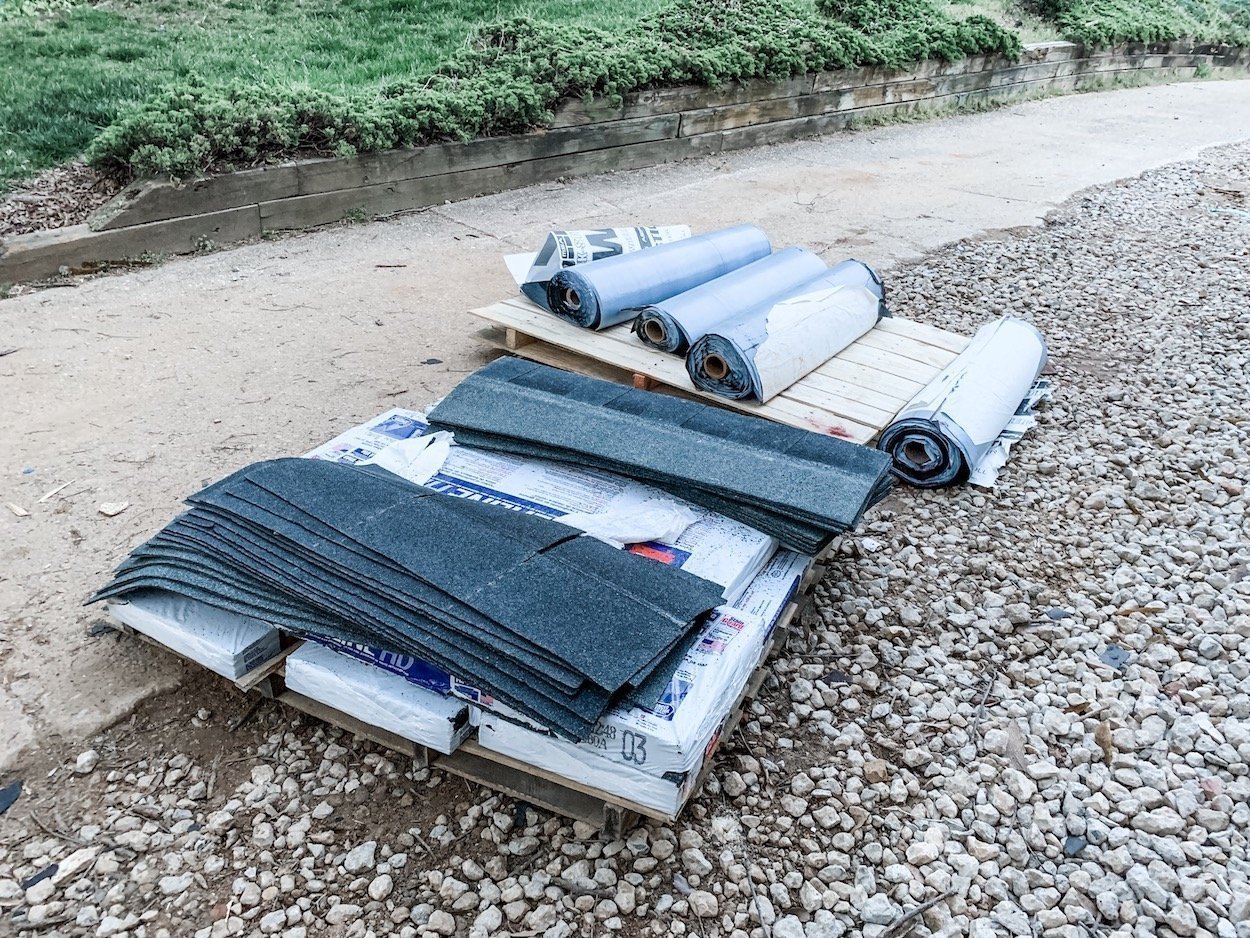 The interior of the house is mostly framed and they put the roof on the house on Thursday. There is a small section of roofing over our screened-in porch that will be walked all over when more exterior work is done to the house, so they covered that part of the roof in something called ice and water shield until all of the work is finished. 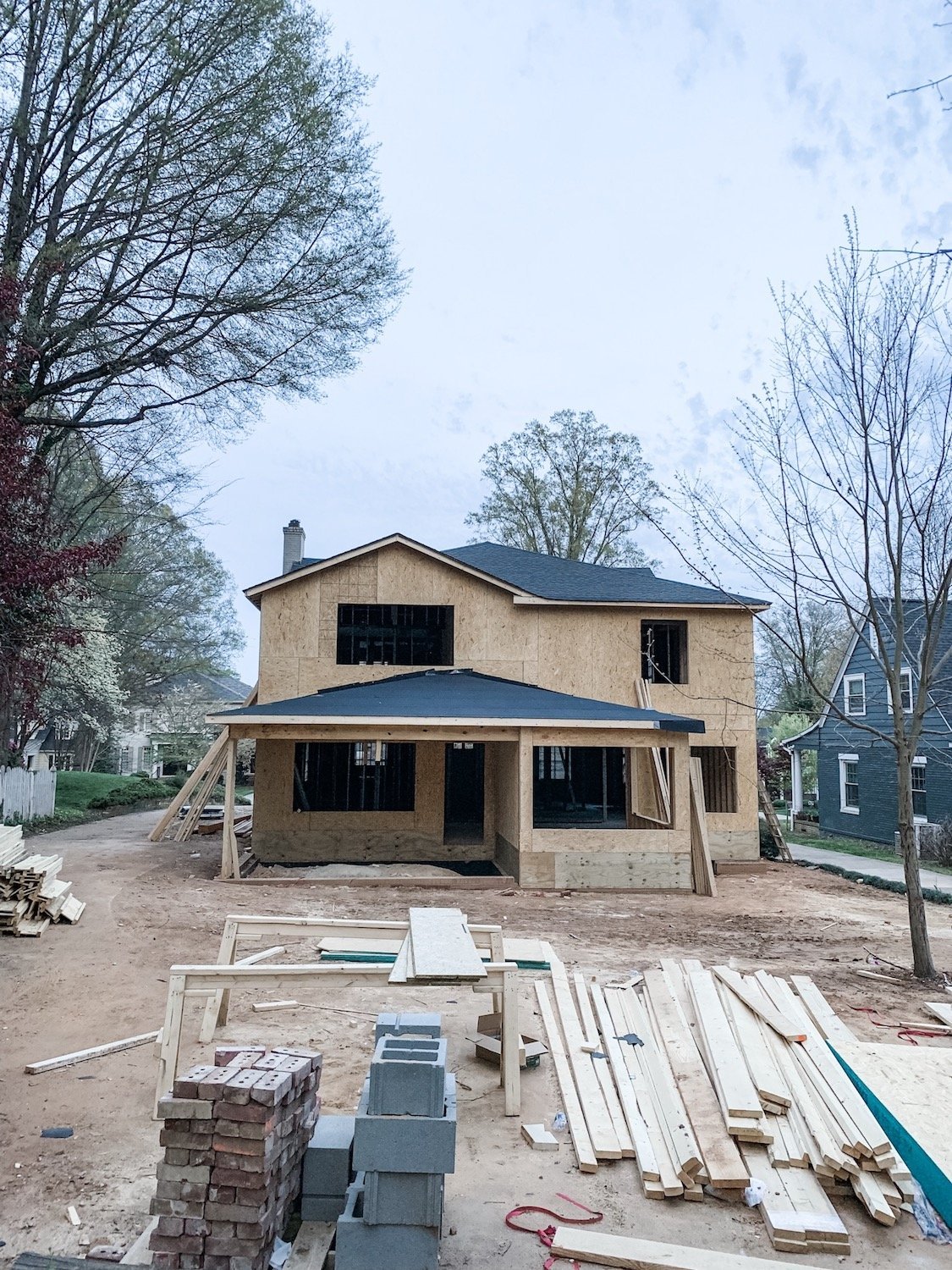 We met at the house on Thursday and ended up spending 3 hours doing a framing / plumbing walk-through. It’s so funny planning things from a blank slate on paper and then seeing it be built. We made a few changes to things and B and I feel really good about them!

When we planned the house, I really wanted to have a linen closet in the hallway. The original house had pretty poor storage space, and I knew we would want to have an actual linen closet for sheets, towels and blankets. Is anyone else obsessed with storage or is it just me?

Since we are leaving the existing house the same upstairs and just adding on, we knew we would have to incorporate a linen closet somewhere in the addition of a master bedroom suite. 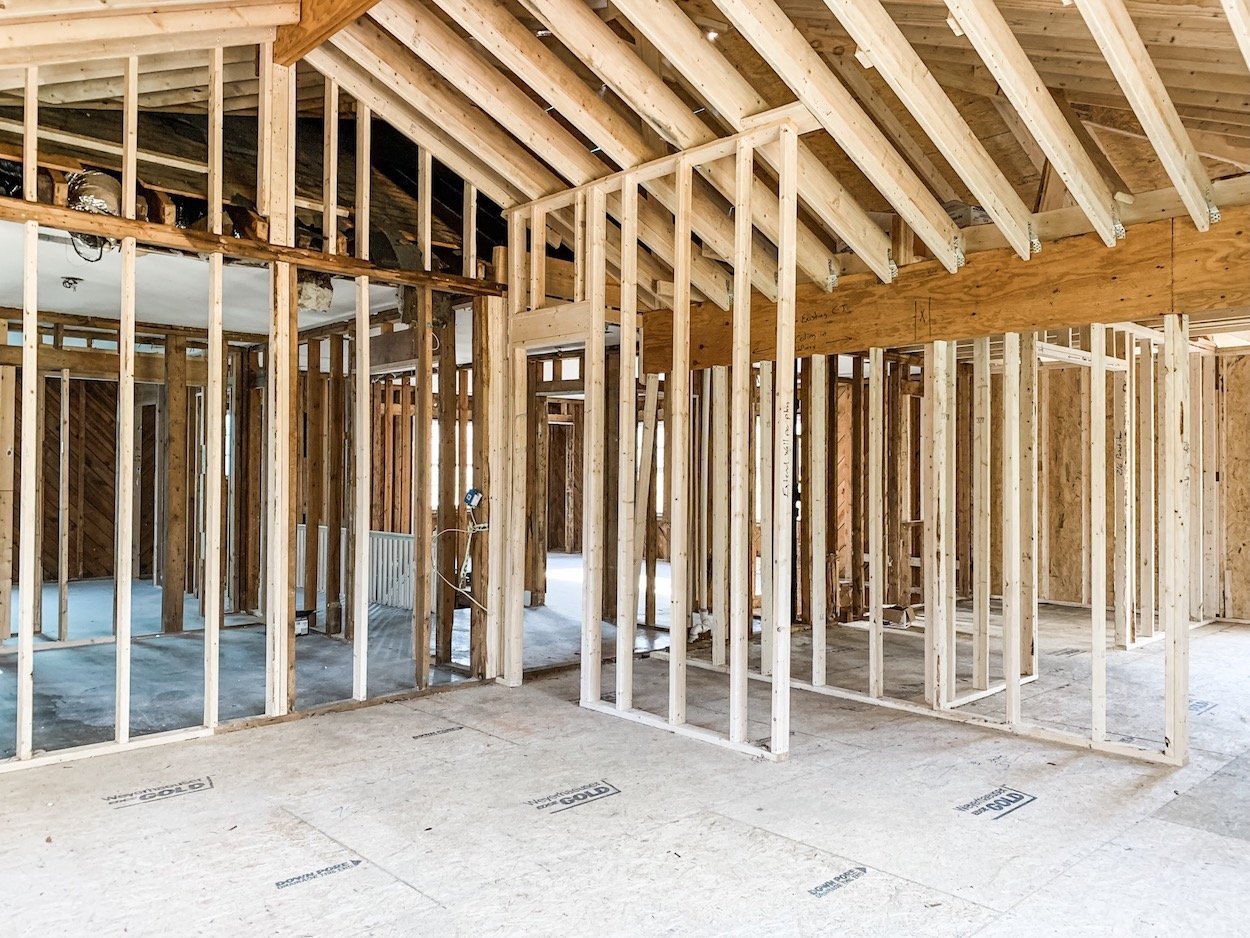 We ended up creating a little hallway going into the master bedroom and adding a small linen closet there. The closet had not been built yet in this photo, but you can see the doorway is framed for it. This design looked like a decent option on paper, but it was clearly not a good idea once the framing was up. It actually felt like the hallway was ruining the whole room by making it an odd shape and decreasing the size. S0000 we decided to remove the hallway and the closet, and have the master bedroom doorway open up into the upstair landing.

I’m going to pretend like our contractor didn’t tell us to do that several months ago. 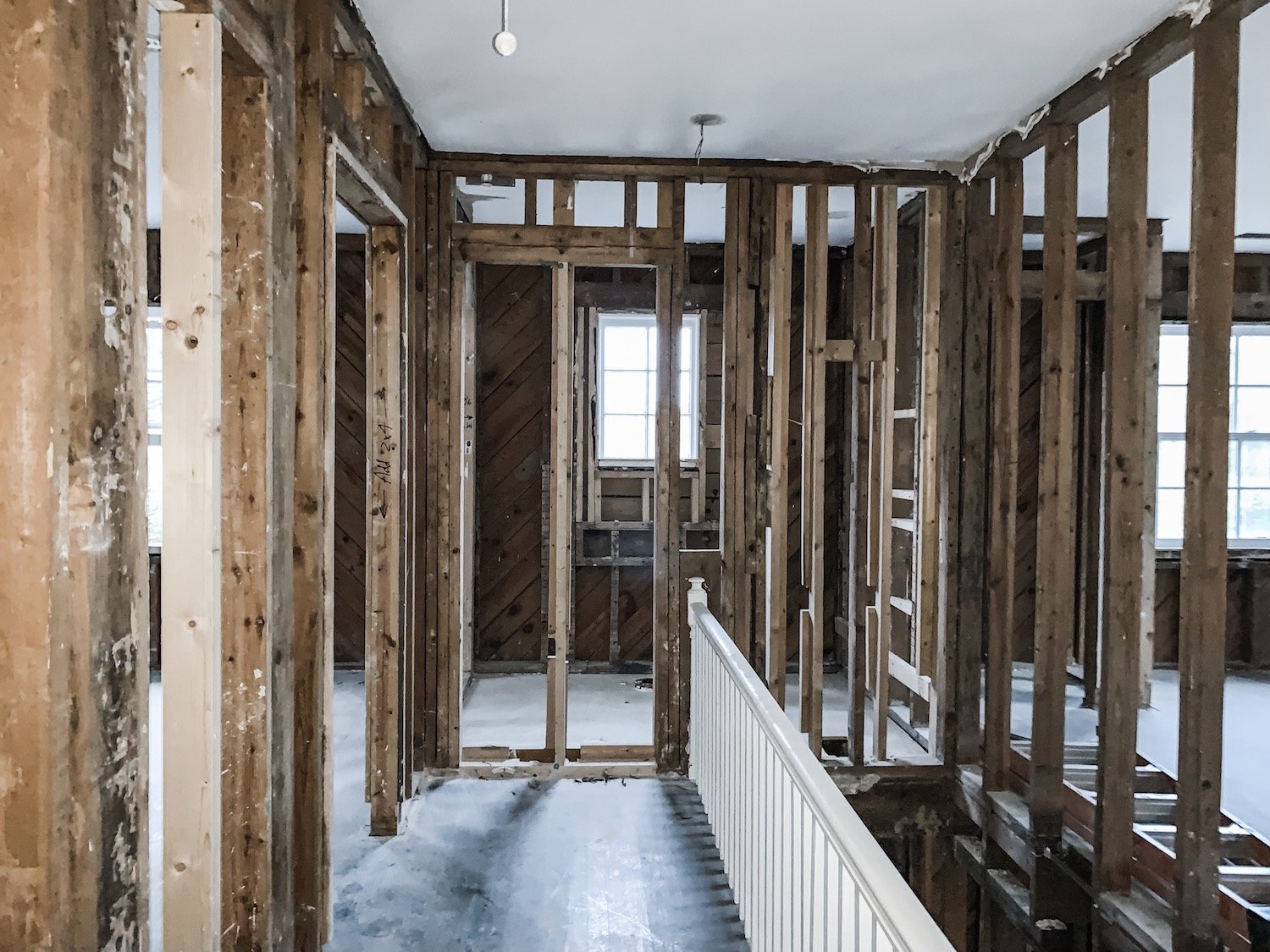 Luckily we were able to move a doorway of an existing bedroom and put a linen closet in at the other end of the hallway. This wasn’t an option for us during the planning phase because we hadn’t intended to tear out the plaster walls or the floor upstairs. But now that the house is down to the studs, it is really simple and inexpensive to move the framing of the doorway or wall.

We spent a lot of time trying to reconfigure our master bathroom because we just didn’t have a good feeling about the layout. We had designed the bathroom to be the same as a bathroom that we loved in a new construction home. 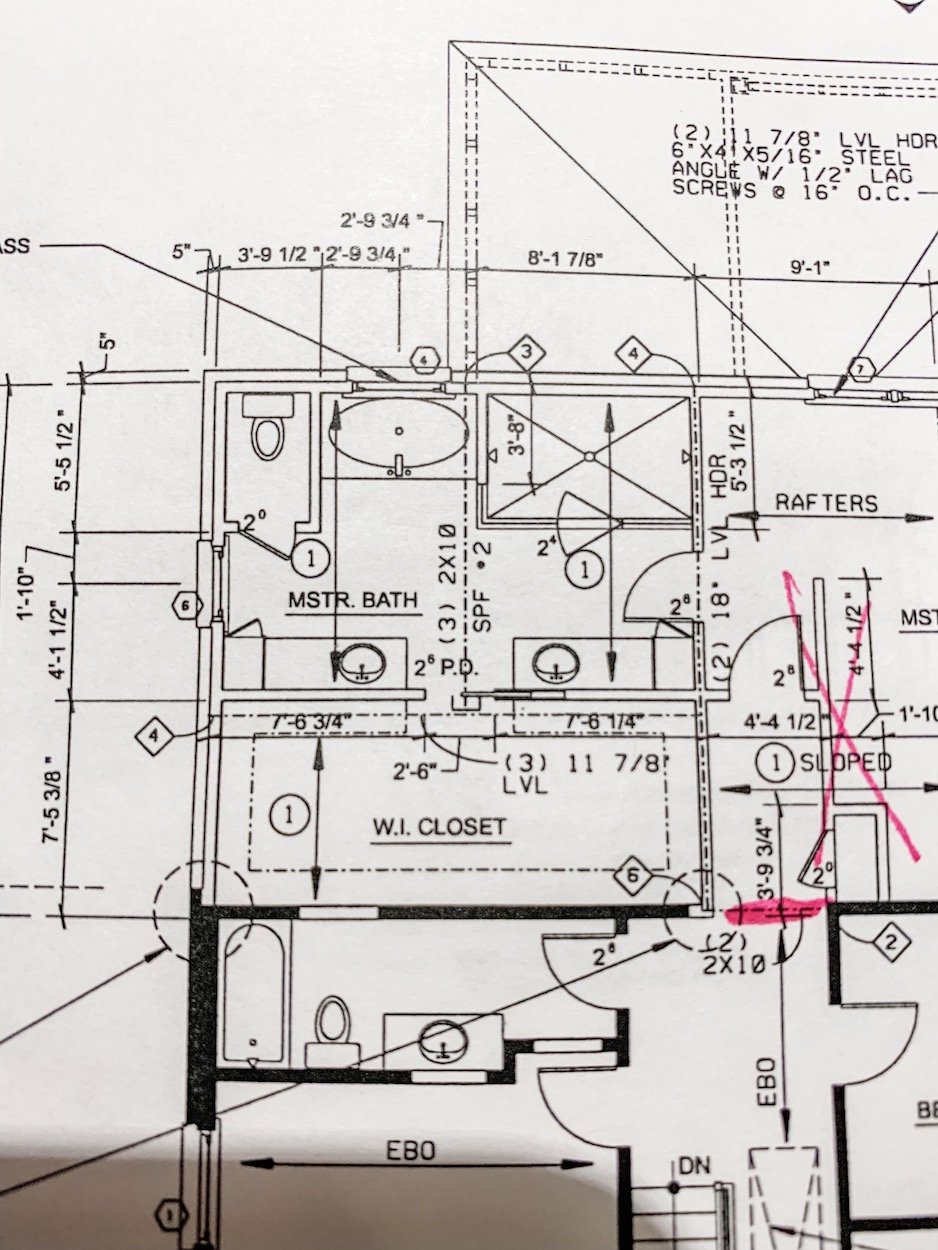 The main issue we realized was that the door opened right into one of the vanities, and we couldn’t change it to swing outside into the bedroom (because that’s where we’re putting furniture). I’m not sure how we missed this during our architect plans, but we knew it would bug us to have to close the bathroom door every time we wanted to use that sink area. 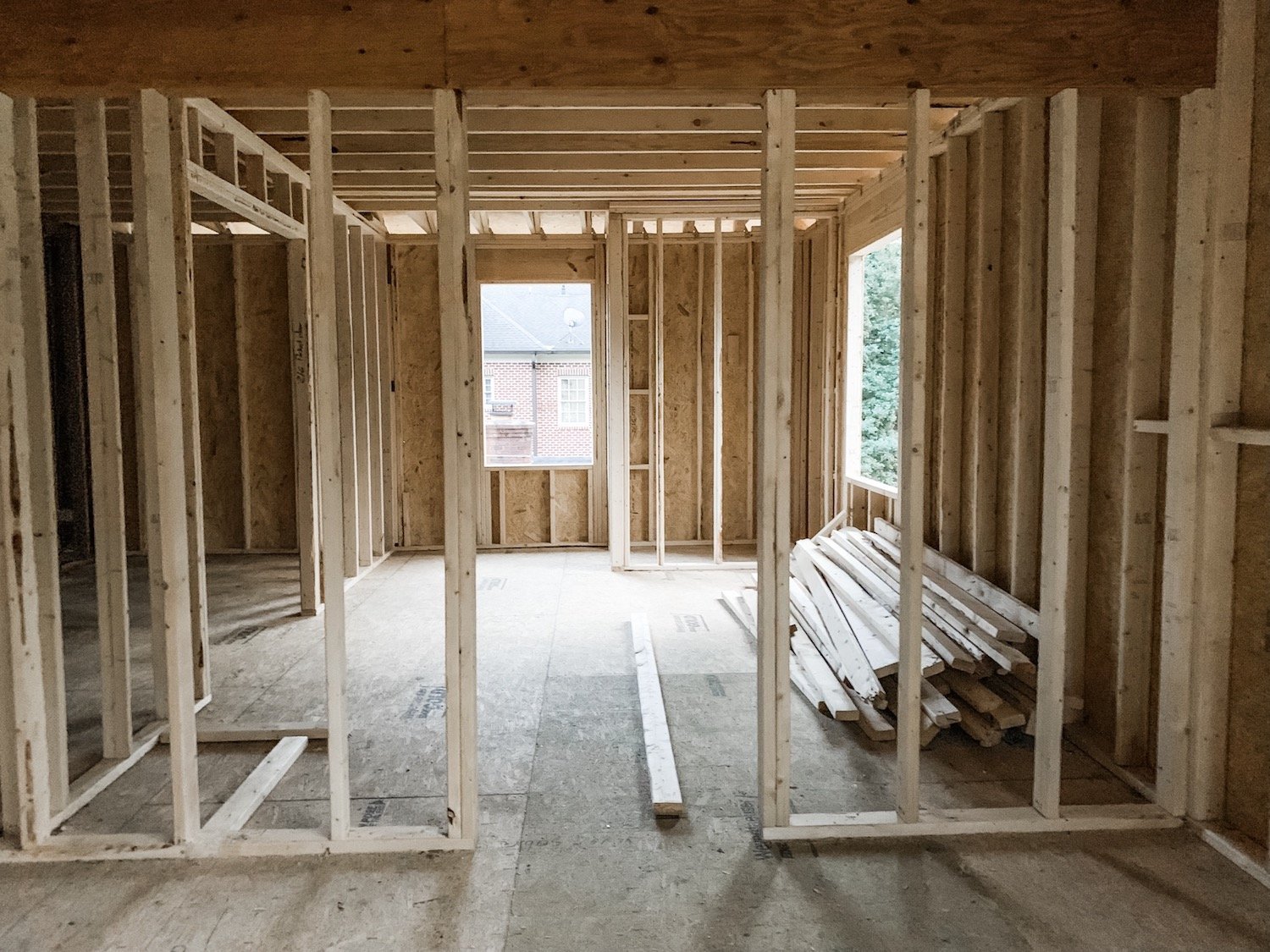 We decided to nix our separate vanities and do 1 long vanity instead. We had to move the placement of our closet door to be able to do this, and we’re putting a linen closet in the corner behind the bathroom door. We figured it was a much better option to have a linen closet behind the door instead of a vanity. I went by the house the on Friday and the framers had already changed everything around.

I walked through the rest of the house with the contractor to discuss the placement of all of the rest of the plumbing and shower nooks. The existing bathrooms were pretty cut and dry. We changed the arrangement of where the washer and dryer will be placed in our laundry/mud room. There have been ongoing discussions about where to put the kitchen sink and dishwasher but I ultimately decided to put them on a far window instead of in the island. I just love doing work at the island and it’s a great place for gathering, and I thought I would regret putting a sink there.

We are going to have a busy 2 weeks coming up. We have to finalize a lot of our selections. Next week they are supposed to do the plumbing, and we’re doing walk-throughs for the cabinets and electrical. Does anyone have any advice when it comes to electrical outlet placement? I know we want to put outlets on both sides of the island, and I have also heard to not put outlets at the bathroom vanity that could impede changing out the bathroom mirrors in the future. I would love any other thoughts, especially if you’ve had any “live and learn” type moments!